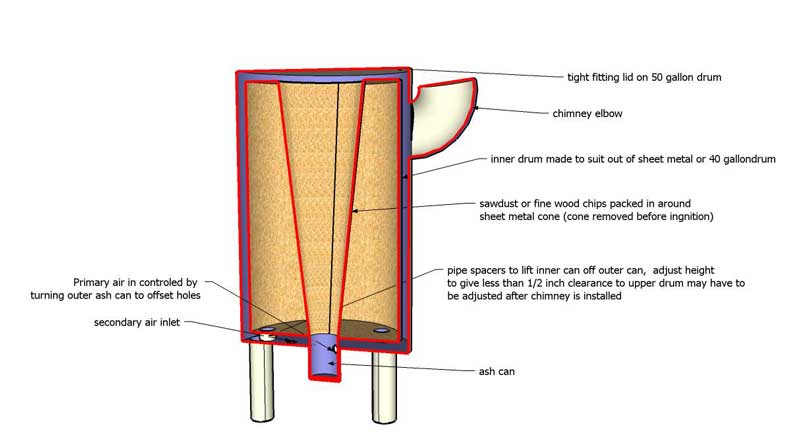 I guess this should likely go to the stoves list, but I am not on that list, it does possibly have wood gas application though.

After asking an older friend if he knew anything about wood gas (75 year old retired machinest from Bulgaria) he replied "sure I know that stuff, I used to make those things" after a bit of clarification (he was an apprentice at14 so he had to really dig in the memory bank) he described this sawdust burner. He said that they used them to heat big shops 2000 sq ft.

They inserted a sturdy sheet metal cone and packed sawdust all around it, packed as tight as possible. The sawdust was from dry wood and sometimes was the stuff left over from their polishing tumbler (they used the sawdust as an cushion/abrasive). You withdrew the cone carefully and put some paper in the bottom, as far down as possible but leaving room for air to be drawn in, lit the paper and put on the tight fitting lid, by his recollection the thing would take almost 200lbs of sawdust and burn for 24 hours. The cone angle he says was critical, if it was too steep the char would fall down into the ash can, but when it was just right only the ash would fall. A small hole in the lid was an observation port and when it was running right the whole inside surface of the cone would be glowing red brightly, and gasses could be seen to spiral up the inside of the cone adhering to the surface of the char.

For best operation the space between the top of the inner drum and the lid was quite important and related to the draw of the chimney. The surface temp of the outer drum would be very high, and he became quite confident about the primary and secondary air arrangements but described it slightly differently to begin with.

His accent is very strong and I am not 100% sure that I got it right in the drawing and he is now in hospital so I haven't shown him this drawing, but will if I get a chance.

I am just learning this drafting software so excuse the lack of detail, for those interested it is very easy to learn, I have been using it for 4 days, and free for 90 days then 500 bucks gets you a legal copy. A very good price for this level of software. www.sketchup.com it is however a surface modeler, not a solid modeler, but still nice for doing drawings, not quite as nice for use with CNC I belive.

Best wishes to all for the new year