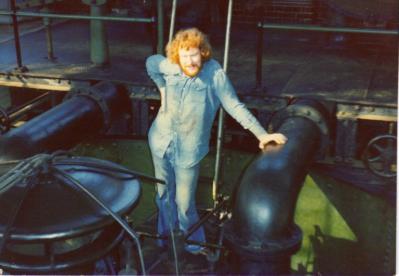 My left hand is resting on the fuel line of the "largest and most efficient" 4 stroke heat engine in the world; there is no waste heat worth mentioning on the power stroke. This item was discussed at the engineering debates held on this very subject.

The explosion was somewhat quenched by the water, giving the addition of steam to help force the water down the play pipe. This principle was demonstrated with a "U" tube pump of similar design, .where the valves were dispensed with and an electric resistance element was suspended inside the top of one of the legs of the "U".
The column of water was made to come in contact with the red hot element, the resulting production of steam caused the column of water to oscillate like a pendulum, the stroke of which could be adjusted by the input of currant to the electric element.

Humphrey's early experiments with an 8 inch diameter pump, where efficiencies were observed, included the weighing of the fuel which was "anthracite", of known calorific value, together with the amount of water pumped against a measured head.

These were the factors of the equations giving the efficiency. There is a theoretical amount of work available, trapped in a lb of coal. It will produce a known amount of gas.

These guys were not amateurs; they were not comparing this machine to a steam engine. They were in awe of the results; they did their best to shoot this one down. And failed.

I wish I could get another look at "The Proceedings of the Institute of Mechanical Engineers." 05-06 of the last century. I believe these documents are kept at the British Museum London.

I was shown around the Chingford Pump house by the chief engineer of the Thames Water Authority, to whom, I had written, expressing my enthusiasm for The Humphrey pumps. I got him to take my picture.

List of the Papers of H.A. Humphrey, The National Archives, UK