Reporting on the slow progress -- As of Jan 05 - 07 -- first batch of cohune shell charcoal produced for fueling the Chinese gasifier.

Well -- I finished the furnace -- finished the retort -- tuned up the two blowers -- and let her rip yesterday afternoon at 2:00 PM.

I ran six tires -- six times -- through it. Over kill if anything -- as even after the first tire it was blow-torching out the bottom vent due to off-gasses from the pyrolyzing cohune nut shell.

It was still hot at the bottom grate when I pulled out the retort this morning at 9:00 AM

The blow torch effect from the off gasses burning out the bottom of the retort (which is a 14 gallon modified butane tank) is very impressive -- very clean burning -- very intense -- very hot.

The home made refractory held up surprisingly well -- looks like I am good for a few more burns -- no problems.

Blown tire fires reach incredibly hot temperatures. Eventually I will incorporate a flash steam coil for production of low pressure 1800 F plus super heated steam for activated charcoal production -- this to be after the charcoal formation has occurred.

I recorded everything with numerous detailed photos -- except the burn off
-- might mount them all one day. To hot to photograph. But have clear pictures of the furnace -- retort -- refractory construction -- etc.

For now -- just a close up of the "result" -- which is a very hard and brittle charcoal.

Guessing about a 30% yield by weight.

I no have enough charcoal to try out the Chinese gasifier ---

The resulting product sure looks proper sized -- so I am dumping that in to the gasifier as is. 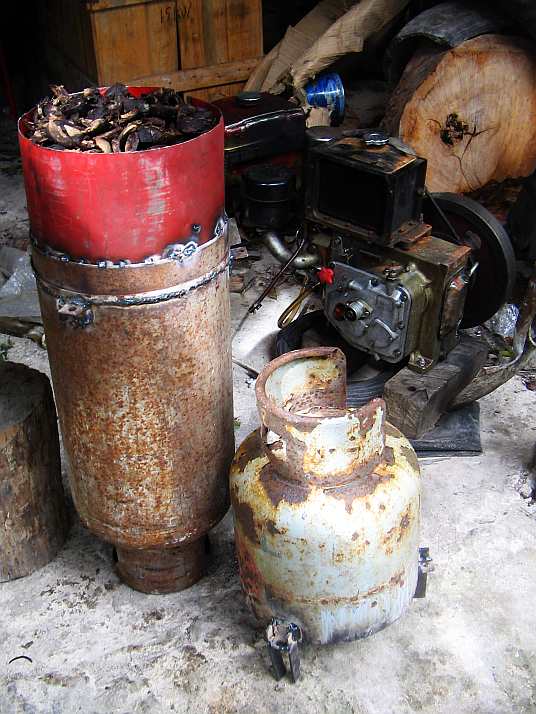 Retort and Diesel
Thanks for sending the photo of cohune charcoal and details of your test
firing. I'm following your progress
>>

Doing it this way assures maximum yields -- I never weighed the before and after this time -- but will next.

Then I will try even simpler ways to achieve the same -- without burning tires -- and find out how much less the yield is.

By doing it the older way -- that is burning it in insufficient air -- which will be much easier -- now to see how much less is the yield when done that way.

This same retort I built can also be a partial combustion charcoal device
-- so that will be the next experiment.

Here is a picture of the retort charged and ready to be closed from yesterday's batch.

I do believe the Chinese gasifier can also be set up to make charcoal -- but in very small batches.

It probably would take three passes in the gasifier to make sufficient charcoal from cohune nut to fill the gasifier just with charcoal after for a producer gas production run after.

The "used" single cylinder Chinese 7 HP diesel pictured in the back ground will be the test engine for gasifier development/diesel fuel supplementing
-- stage.

After the Burn
I have appended another graphic showing the unit just lifted out of the furnace roughly 16 hours later.

The top of the retort is still on -- and it is also the other part of a butane cylinder laying on the ground to the immediate right in the other picture.

The Steel rebar rods on the top are 3/4 in diameter and the heat softened them considerably.

The beehive furnace is directly behind the retort in this picture.

The entire unit fits into the top -- and hangs on those two rebars.

The furnace door is directly behind -- that is swung down and the tire slid onto a grate below the bottom of the retort and ignited.

This is not a "practical" way to make charcoal!! But just happens to be what I had handy.

A butane tank was also used as the pot --

A tire burns up completely in 10 to 15 minutes -- it used to require but two used car tires to melt and super heat for good casting -- 80 to 100 lbs of aluminum.

Tomorrow I'll post a graphic of how the home made refractory stood the heat and abuse from a six tire burn.

I am very satisfied with those results.

But it is impractical to make charcoal by this methology. Too much work -- to little yield.

I would need a cylinder of at least three times the capacity of this one shown.

By the way -- the charcoal so produced is very hard and brittle -- I hold a broken apart piece in my hand now -- and the shear face is very shiny -- looks just like coal -- I shall try and take a good macro of it and post that graphic.

I would guess the heat was exceptional.

Through the door view

Of further note -- even during the last part of the last tire burning -- when everything was at the greatest heat -- one could still rest their hand against the outside of this furnace and feel a heat barely warm.

In this picture the door has been swung open -- and one is looking straight in -- before I had lifted the retort out from the top.

You see the refractory lining of the inside of the beehive -- the steel rebar grating -- and the bottom section of the retort.

The pile on the grating represents what is left from 6 care tires -- burned
-- one at a time.

The door was opened after one tire had finished burning -- another tire slid centered under the bottom of the retort.

One needed to work very quickly -- as the radiant heat was dangerously scorching.

The trick is to properly through the tire onto the grate then push it in place with a long (10 foot) stick -- then quickly duck in and swing back shut the door.

By the way -- the door never warped -- so that design is well done to.

The flames shoot about 10 feet over the top of the furnace -- all about the retort for 10 to 15 minutes- - then that tire is done.

That continues to burn even after the tire is finished.

The bottom of that retort is an open hole where the butane valve went.

When opening the door one is greeted with a roaring blow torch of impressive capacity as the gasses of pyrolysis are flowing out quite rapidly and being ignited.

After 2.5 hours of cycling through 6 used tires -- the torch was barely burning and that is when I shut down the operation.

But the fire pit was still very hot -- boiling water -- when I took this picture -- 16 hours later. 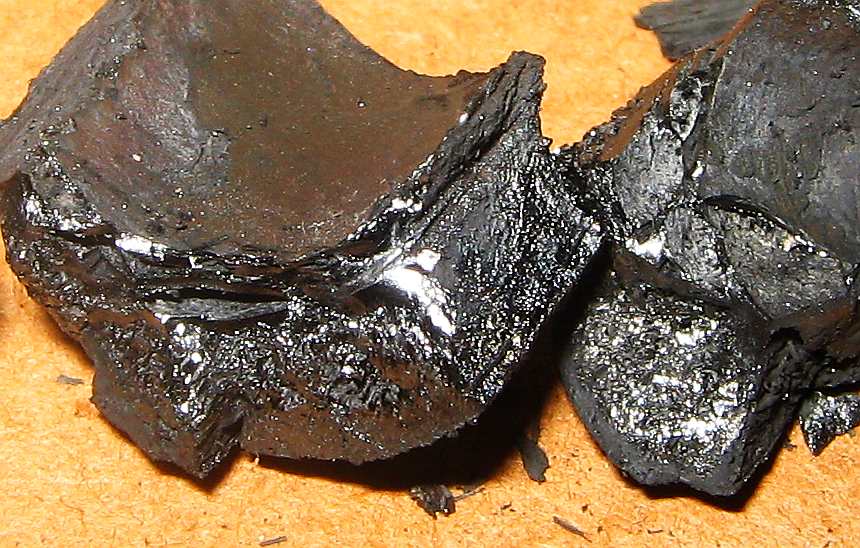 Macro of Charcoal
I managed to get a shot that shows well the dense -- hard -- charcoal material.

Looks like it will make a gasifier fuel that supplies producer gas with low tars??

And certainly -- the as supplied gas cleaner that comes with the gasifier should clean what is there -- out.

Kevin -- I wonder if I grind this to a fine powder in my grinder if the result would make a good agent for smelting used car batteries to extract pure lead??

Today's graphic is a detail of the top of retort while still mounted in the beehive -- but 14 plus hours after the burn. 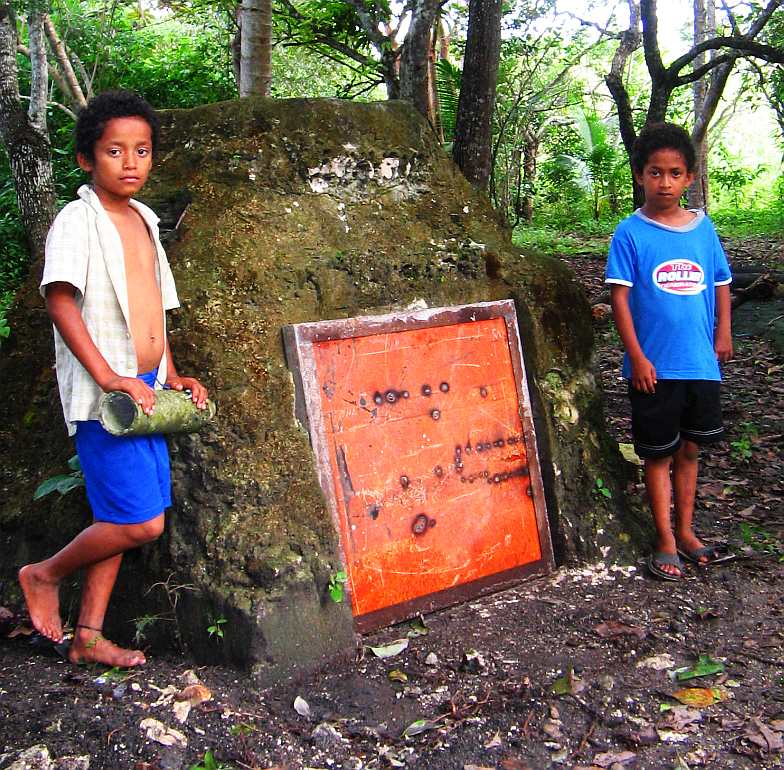 I started a huge renovation on the furnace today -- will be adding two more blowers.