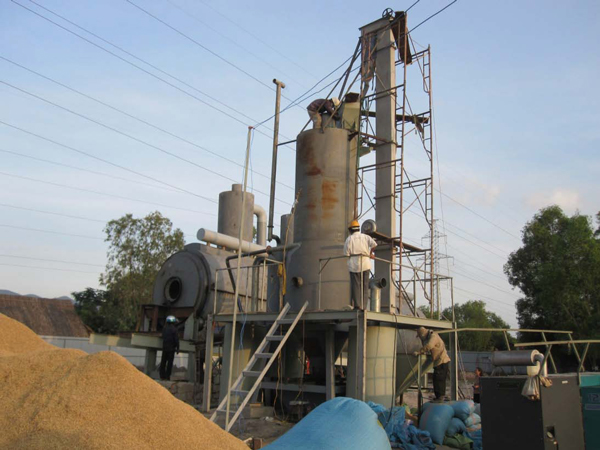 This paper (see attached) describes a continuous-flow rice husk gasifier (CFRHG) designed and developed for various thermal applications such as cooking, drying, kiln firing, baking, and others. The technology follows the principle of a moving-bed, down-draft reactor converting raw rice husks into combustible gases that is rich in carbon monoxide (CO) and hydrogen (H2).

Different sizes were built and tested in collaboration with the private sector both in the Philippines and in abroad. The gasifier units which were built, tested and evaluated have varying reactor diameter, ranging from 0.40 to 1.20 m with a corresponding power output of 35.7 to 321.2 kWt. The rice husk consumption rate for the different reactor diameters tested ranges from 19 to 169 kg per hour. The specific gasification rate of the gasifiers was found to operate well at 150 kg/hr-m2. The temperature of the gas leaving the reactor varies from 150° to 270°C for all the units tested. The flame temperature reaches as high as 400° to 800°C, depending on the size of the reactor. The bigger the size of the reactor diameter, the higher is the flame temperature. The parasite load varies from 4.2% for the smaller diameter reactor to 1.5% for the bigger model. Combustible gases are generated within 5 to 30 minutes for the different sizes tested. The heating value of the gas ranges from 1200 to 1400 kcal/m3. And, only one person is needed to operate the small gasifier and two persons are needed for the big gasifier model.

Results of the tests showed that the CFRHG is convenient to use and its operation is easily controlled with the use of gas valves. There is no smoke emitted during operation. Black carbon content and tar emissions were found to be very minimal. The char produced can be used for agricultural application and the ash produced can be used for the production of low-cost construction materials.

The CFRHG technology can be produced at P1,500.00 per kWt. Presently, the different gasifier models presented are installed in the Philippines, Indonesia, and Vietnam. In terms of payback period, investment cost for the CFRHG can be recovered within 2.4 to 5.3 months as compared with kerosene, diesel, and LPG fuels.